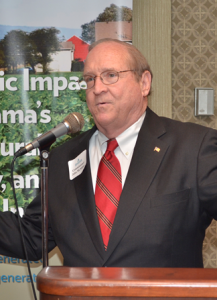 Alabama’s poultry industry and the Alabama Department of Agriculture & Industries are part of a nationwide effort to respond to a possible outbreak of Avian Influenza (AI), the largest animal health emergency in U.S. history. As waterfowl from Canada migrate southward beginning this autumn, state and federal animal health officials will be on a heightened alert for a re-emergence of the disease.

State agriculture commissioners, secretaries and directors throughout the nation have forged a working alliance with the USDA to develop and implement a sound risk management and disaster assistance program based on flock plans and compliance agreements to alleviate the significant expenses born by poultry growers. To date, USDA has issued as much as $600 million in indemnification payments to assist in cleanup efforts, with an additional $500 million committed to address another outbreak.

Alabama is the nation’s second largest producer of broilers, second only to Georgia, with 21.5 million broilers placed each week into production. With approximately 2800 commercial poultry producers, Alabama’s poultry industry has a $15.1 billion impact on the state’s economy, employing some 86,000 people.  In addition, there are many more game bird, game fowl, and backyard poultry flocks.

“If there is an outbreak of Avian Influenza in Alabama, a control zone will be set up around the affected area,” said Commissioner John McMillan of the Alabama Department of Agriculture & Industries. “We want to thank the Alabama Poultry & Egg Association for their diligence in working on this comprehensive plan.

This could affect other industries also, especially the cattle industry if a stockyard or other livestock was located within an infected or  buffer zone.